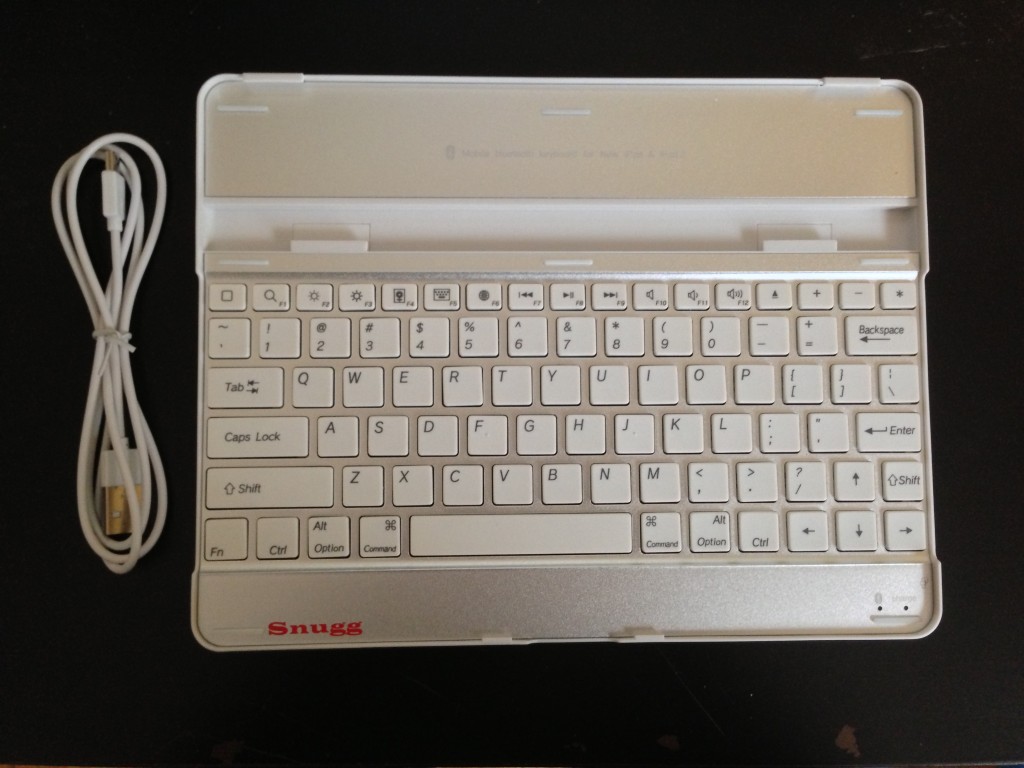 The first thing I noticed about this case was it’s silver finish. It looks pretty cool when on the iPad as a case, but a little less cool as a keyboard. The case is great, but the keys on the keyboard look and feel like they don’t measure up to the case, itself. Together they seem like an uneven pairing. While I’m knocking out what I don’t like, this snaps on as a case fine, but is pretty difficult to get back off. The first time, I thought I’d break it, but it’s sturdier than it looks at a glance. Finally – and this is the part that made this a part time solution for my own iPad – when I want to use the ipad upright without propping it up and not on a table top, I have to set the case aside. This was a big drawback after seeing so many solutions that keep the keyboard attached to the iPad in some way.

Although I found a few gripes, I found more to like about this keyboard/case solution than I disliked. For starters, The case and keyboard are much more slim than other solutions I’ve seen. I also like the slot to prop up the iPad but I feel like that’s a bare minimum for this kind of product. What impressed me the most was the integrated Apple function keys. With a single key press, I could search, lock the iPad, toggle the on screen keyboard, adjust the brightness, and manage music controls and volume levels.

Below is a video showing the case and some of its features.

For the price, it’s about on par with other keyboard cases. Where it can fall short as a case, it makes up for in style and form factor. Not bad for fifty bucks, especially if you’ll use the keyboard more than the touch screen.

Blackberryâ€™s PlayBook tablet has suffered tremendously in the PR realm since being released last year. After initially being met with mixed reviews, the tablet was faulted for its lack of key features and returned by users to retailers in droves. Hundreds of thousands of PlayBooks still sat on retailer shelves at the end of last year, a fact that motivated RIM to make drastic price reductions to the product. Now, the company is trying to revive the tablet by introducing a keyboard accessory â€“ the Mini Keyboard â€“ that offers considerable portability, ease, and sophistication. While other tablet manufacturers have introduced similar keyboards of their own, the Blackberry version appears poised as one of the best options out there.

The Mini Keyboard is just 0.24 millimeters thick and offers users a sleek and portable design (replete with a carrying case), a touchpad that works well with the PlayBookâ€™s unique mouse strokes, a superb battery capacity (up to 30 days without needing charge), and even a 128-bit keystroke encryption. The keyboard is small but, according to reviews, a highly functional and adaptable one.

RIM hopes that the keyboardâ€™s success will help the company rebrand and reposition its PlayBook as a tablet well-suited for the user who seeks durability, speed, and productivity. While the tablet may not provide the many features shared by its competitors, it can still function as a cheap (and lightweight) laptop for heavy-duty users. It can still provide fast typing speeds, fast boost speeds, and fast browsing speeds in this age of ultra-quick T3 bandwidth and MegaPath DSL internet connections. But for the PlayBook to have these strengths, the Mini Keyboard needs to not simply be a good product (which it is), but also a redefining one (which it very well may not).

The Blackberry Mini Keyboard retails at $119.99. Will it help nudge the PlayBook back towards relevance? RIMâ€™s executives can only hope.

This guest post is by Nancy Evans. She is a freelance writer that specializes in tech and business.

The other week, I was asked to review an iPhone app called Voice Keyboard. The application is a piano keyboard, but each key playes a sound recorded by you. General use
The application functions like a normal piano keyboard. You have a range of keys that represent different notes like E, F, C, A, etc. As anyone could predict, the screen is presented in landscape mode to show all the keys and allow easier two-handed use. In the top left is a RECORD button. When you hit that button, it looks like the image above to indicate that it is recording. On my particular iphone, it seemed to take a second to get there. It’s not a problem if you time it out right, but if you don’t, you get extra silence at the beginning of your recorded audio and that can sound wrong when playing it via all the keyboard keys later. Once you’ve recorded the audio clip, you just play it back with the keys.

By default, the recorded audio is just being slowed down or sped up. The deeper notes take a lot longer to complete playing than the higher notes. I think it’s better for me this way because I like how the higher note sounds overlap the lower ones. You can modify this by hitting the TIMESHIFT button. This will make all the notes the same play length while maintaining the pitch variations. You can also change the playing time by turning off the sustain with the SUSTAIN button. With this turned off, the notes only play as long as you hold them. You can also save recorded audio tracks and load them back up later, looping or normalizing them.

Be creative and have fun
While there may be some practical uses for this application, it served mostly as comedic entertainment for me. Initially, it didn’t do that because I was just blurting out “Joe Tech” or “Test” into it. Then my wife and I collaborated and it got more creative with funny noises and song verses. Get another person in the room, hit record, you laugh, they laugh, stop recording, and then hit low keys randomly and then some high keys randomly. It’s magical. I promise.

At the end of the day, it’s definitely entertaining, but I don’t know if it’s really $3.99 entertaining. Perhaps if there was a more practical use or I saw myself using it frequently, it would be worth the sticker price. The $3.99 price is just not matched to this iPhone user’s current usage. With a small price drop, I could see it going a long way. Now if I could map a single sound to each key, that would be well worth the cost.