I’ve reviewed so many iPhone cases that go over the $20 mark (sometimes way over) that it’s nice to see one come in just under twenty bucks. I had to wonder if low cost meant a cheap product. Find out in this review of the Luvvitt Clearview iPhone 5 case.

To answer the first question right off the bat, let’s talk about the Clearview’s quality. It became apparent, right away, that the price for this case does not foreshadow an inferior product. This is no flimsy case. Instead, Luvvitt put together a classy case that uses a simple design paired with the iPhone 5’s inherent aesthetics to deliver a protective case that looks like a subtle fashion accessory for your phone. I created a video review, below, to show off the Clearview on my own iPhone.

I’ve seen (and owned) cases that are either completely clear, frosted, or completely opaque. They’re OK, and some even look good, but there’s just something about the shock resistant TPU edges in black, mixed with the perfectly clear scratch-resistant back that looks really good. It’s also not likely to crack like my last case when I drop it. Getting the case on and off is a little more work because it’s designed to form a tight seal around the edges to keep dust from getting between your phone and the case. For $19.95, this case is a bargain.

Don’t have $19.95 to spend? No problem. Just enter the contest below and you might win the extra case Luvvitt kindly sent me to give to one lucky reader. Simply click an option and follow the instructions to enter. If your number of entries increases, you’re doing it right. Good luck!

Last month, I tried to squeeze thousands of displays at CES into just a couple days. That meant a lot of skimming past the same old stuff and stopping, occasionally, for the unique and noteworthy. Usually, it was some flashy thing with lasers that did the trick, but in one instance, it was the genius of simplicity. When I saw Danny and Lazy-Hands, I stopped for a closer look. 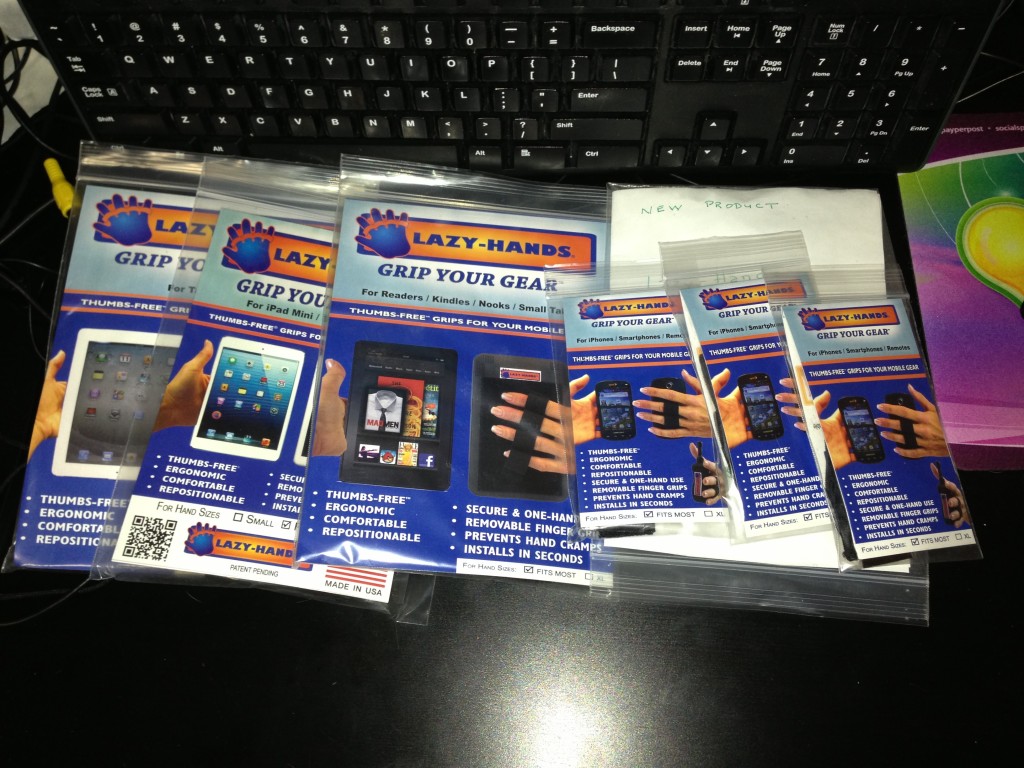 The funny thing is that Lazy-Hands isn’t an entirely new idea. I’ve seen several iPad cases that have a strap of some sort built in, but they were all cases and that was their selling point, the strap. What about the other features of other cases out there like screen protection and bluetooth keyboards? What if I want the strap without the case? What if I don’t have one of the top-selling devices people always make accessories for? Lazy-Hands stepped back from all the over-engineering (and the extra cost that comes with it) and offered up a simple and affordable solution with minimal materials and an easy design. Watch the quick video to see what I mean.

I have an iPad 2 and it’s certainly portable, but you notice the weight after holding it for an hour. I ride in a van-pool to the office five days a week and often use the commute to catch up on my reading. Lazy-Hands Grip for Tablets was made for this. When Danny said he’d send out samples, I was sure this would be a game-changer for me. It is, but only as much as it can be. I love the protection my case provides, so instead of applying the Lazy-Hands velcro swatch to my iPad directly, I applied it to my case. It works great, but it’s still tiresome to hold after a while just because of the weight. To be fair, this is not the fault of Lazy-Hands. It did what it was intended to do, and in my case, that meant increasing the comfort time for holding my iPad from about 15 minutes to a little over an hour.

Like my iPad, I really prefer to keep a case on my iPhone, so I attached the Lazy-Hands Grip for iPhones version to my hard case and tried it on for a week. My first concern was getting my phone in and out of my pocket. Surprisingly, that concern went away as I used it all week and allowed me to focus on the advantages of this product. Although decreasing the drop-factor of my phone was not the most important feature for me, I found that I began to naturally rely on Lazy-Hands to defy gravity for me while I loosely let the phone lean in my hand. What I most wanted from Lazy-Hands was my thumb back. The iPhone 5, in all it’s tall glory, made reaching every inch of the screen with my thumb nearly impossible when holding the phone with the same hand. For the record, my hands aren’t tiny. It takes a little getting used to, but now I can easily navigate every inch of the screen with my thumb while my other hand is free for, say, mocha. This was well received.

Lazy-Hands isn’t a curved TV or coffee pot that tweets it’s status. It’s a product whose allure is a combination of it’s simplicity, usefulness, and low cost to the consumer. The value of it is doubled when you realize that the Grips for iPad comes with two Grips and two adhesive sheets. The Grip for Tables / iPads runs $17.99, while the Grip for iPhones / Smartphones is only $8.99. If you have something in between, they offer the $15.99 Grips for iPad Minis, Kindles, Nooks, and other small tablets and e-readers. The product is worth the price and it works just as expected.

Want One? Here You Go

Well, OK. We can’t give one away to everyone. Luckily, though, our review package came with a bunch of Lazy-Hands product, so there’s extras to use in another giveaway. If you’re a regular reader, you know the drill. For the uninitiated, here’s how it works. Just select one of the entry options below and complete the instructions to earn your entries. You know you’ve done it right when your number of earned entries increases. I’ll let the giveaway’s random number robot magic thing select some winners who will be notified by email.

It’s time for another contest from my friend Justin at DragonBlogger.com. After almost 25,000 entries in the PS3/XBOX giveaway, Justin decided to give away a laptop, too.

Not bad for just sharing a link or following on Twitter or Facebook, right? This one’s open to people outside the U.S., too, but you’ll have to pay for your own shipping.

JoeTech.com is co-hosting this contest, but the laptop comes from the generosity of the sponsors below. Without them, it couldn’t happen.

The Lenovo Laptop Giveaway Contest is being held by Dragon Blogger Technology in coordination with the following sponsors:
Metallman’s Reverie
Blog Engage